The following editorial from the Topeka Daily Capital gives some good reasons why state legislatures should make haste slowly in enacting laws that to hundreds and thousands of intelligent people and good citizens seem unjust and uncalled for:—

There is a bill pending in the Missouri legislature, and favorably reported, to revise the medical legislation of the state, one of the objects of which is to suppress the Christian Scientists. There is nothing more difficult than regulating medical practice and states have frequently caused more harm than good by attempting to define the legitimate art of healing. The assumption has been in the legislation of most of the states that the people are fairly capable of protecting themselves, with laws to back them against irresponsible fakers and frauds. Doctors themselves, who have always been sticklers for strict legislation, are becoming more liberal every year. The best physicians admit that, after all, the things they don't know about the human system and its antics are more than the things that they do know. The progress of the healing art has been largely empirical from the beginning of time to the present, and if greater progress is being made to-day than in times past, much of the credit may be fairly assigned to the greater open-mindedness of the profession and the increase in the number of cults and schools. 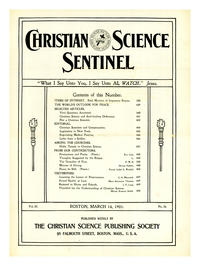