Shortly after the opening of the second session of the Fifty-sixth Congress on December 3, 1900, President McKinley's message was received and read. Foreign affairs received the fullest consideration and the trouble in China was the leading theme. The President carefully reviewed the circumstances which led up to the trouble, stated what had been the policy of the administration, and expressed a hope of immediate and satisfactory settlement. The situation in the Philippines was also considered at length and favorable progress reported.

We make the following excerpts from the message:— 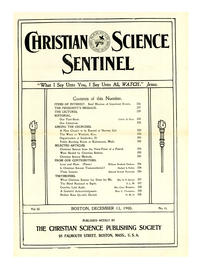