This article was later republished in&nbsp;The First Church of Christ, Scientist, and Miscellany:&nbsp;My. 264:7-265:32

The following was contributed by the Rev. Mary Baker G. Eddy to a symposium on Thanksgiving which appeared in the Boston Globe, November 29, 1900. There were twenty-three articles written by prelates of various denominations, and Mrs. Eddy's was the only one contributed by a woman.

The communications were sent in answer to the following telegraphic inquiry from The Globe:— 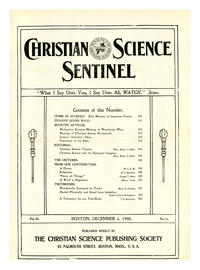