A Washington press dispatch of October 9 says: The gold supply of the United States Treasury is now competing for the position of the largest single stock in the world. The total is now near the great stores of the Bank of France and the combined fund of the Imperial Bank of Russia and the imperial treasury. The total held by the treasury on all account was $443,462,226. Of this amount $236,492,442 is the property of the Government in the reserve fund and the general cash balance, while the remainder is held against outstanding gold certificates.

The United States is fitting out its first cable ship for the exclusive use of the Government. The vessel selected for this service is the former transport Burnside, which has just been reconstructed and equipped at the Morse Iron Works, Brooklyn. The Burnside is preparing to sail soon with five hundred miles or more of deep-sea cable, to be laid in the Philippines. 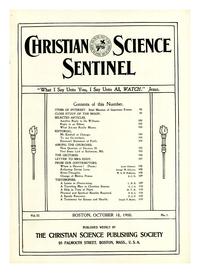