Charles Fowler with contributions from Longfellow

Marvelous book! itself also a subject or a parallel of every miracle and deliverance recorded in its pages. Proscribed and imprisoned, the angel of deliverance illumined the darkness, stripped off the shackles, and awed into conscious obedience the self-opening doors. Exiled, it has created a new kingdom and shifted the centre and balance of power. Carried away captive, it has broken down rival altars and overthrown false gods, till the right of way has been accorded to it by friend and foe. Sold into bondage by false brethren, it has captured the hearts of its masters and ascended the throne of dominion. Driven into the sea, it has gone over dry-shod, seeing its enemies overwhelmed in the flood and itself singing the glad song of deliverance. Burned on the public square by the public executioner, it has risen phœnix-like and floated away in triumph, wearing the smoke of its own funeral pyre as a flag of victory. Scourged from city to city, it has gone through the capitals of the civilized world, leaving behind it a trail of light attesting its divine authority. Cast into the lepers' pest-house, it has purified the scales of contagion, restored the soft, pink skin of smiling infancy, quickened the energies of romping youth, and re-created the sinews of heroic manhood. Betrayed by a kiss, it has stood erect in the calm majesty of eternity, amid the swarming minions of its enemies. Nailed to a felon's cross, it has illumined the darkness by the radiance of its own glory, and transformed the summits of sacrifice into a throne of universal judgment. Sealed into the gloom of a sepulchre, it has come forth with the echoing footsteps of Almighty God, rising to dominion over all intelligences. Marvelous book! Full of divine life and power. No one can touch even the hem of its garment without being healed. No one can come near enough even to stone it without being blessed. It stands alone, without a rival—even its enemies themselves being judges.—Bishop Charles Fowler. 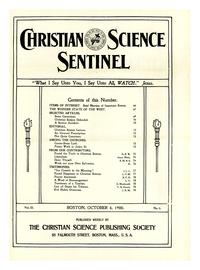