The Price of Science and Health

The Christian Scientist is always amazed at the statement that the price charged for "Science and Health with Key to the Scriptures," by Mary Baker G. Eddy, is too great. Such a statement must come either from one totally ignorant of the Principle of Christian Science and what the book contains for humanity, or from one who does not recognize this argument as one of the subtle efforts of error to hinder the dissemination of Truth. Of course it may proceed from that malicious claim of evil whose pleasure it is to crucify Truth and its leaders, and if possible to destroy God's methods of establishing His kingdom upon earth. But the argument could only find lodgement in a mentality whose idea of money is greater than his idea of God.

The Christian Scientist who remembers his hopeless suffering, disagreeable doses, and doctors' bills (often having paid one, two, three, and more dollars for a single bottle of medicine) before the glorious teachings of this blessed book delivered him from all this misery and expense, is amused and surprised at the suggestion that three dollars is a high price to pay for Science and Health. True, we hear of authors who give to the public one or more books per year, at the cost of one or two dollars each, but has reading these books ever healed man of a single disease, or freed him from the expense of doctors' and druggists' bills, or taught him how to heal others of disease, poverty, or sin? Yet reading Science and Health is doing this for multitudes of people. 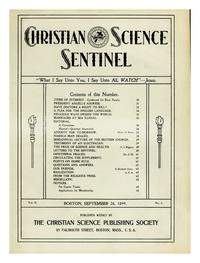