At the Chautauqua Assembly which met at Winfield, Kan., this summer, Miss Pauline Lewelling was assigned the subject of "The Five Most Famous Women of America." She chose the name of Mary Baker G. Eddy as one of them. She is not a Christian Scientist, and so stated, but said she hoped there was no one there so prejudiced as to refuse to see the beauty in the character and life of Rev. Mary Baker G. Eddy. She sketched her useful life, giving several incidents to illustrate particular points. She spoke of the miraculous growth of her church, denied some charges often brought against her, read the tenets of the church, and challenged any one to deny what she had claimed, that Mrs. Eddy is, and rightly so, one of the most prominent women in America to-day.

"A city that is set on a hill cannot be hid." While there are multitudes who have not yet entered the City, yet they have seen its beauty from the valley. V. B. 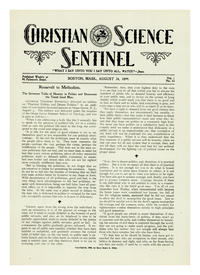