"Observer" Has Another Letter on the Subject.

Editor Ontario:— It was recently stated in a sermon delivered in the Bridge Street Church, that Christian Science was "Pantheism," a religion of heathenism, existing before the advent of Christ, with a little addition tacked on by Mrs. Eddy. The Century dictionary defines a Pantheist as "one who believes that God and the universe are identical." Science asserts God is Spirit, and is reflected only by spiritual things. God is not, therefore, it is said, identical with material forms, but is identical with Spirit and with nothing else. Christian Science is therefore not Pantheism, but in direct opposition to it. Pantheism believes in the intelligence of matter, which belief Christian Science overthrows.

There are over four hundred sects of Christians, each one of the four hundred founding its claims upon the Bible, and having some dogma peculiar to itself, each sect numbering thousands, some millions of believers. Among them we may well ask where and what is truth? In examining the claims of a religion how often we look with a prejudiced eye? A man who is prejudiced is one who judges in advance of the evidence. He does not wait for the facts and found his judgement thereon, but comes to a conclusion because of certain mental conditions of his own. Prejudice has caused the great wars between different religions, which have deluged the world with blood, caused millions to die the most horrible of deaths from persecutions; each persecutor invoking the name of God and claiming to be warring for God to destroy obstinate unbelievers; praying to God to help their arms and destroy His enemies. Protestants have flown at each other's throats in many lands, each claiming to be God's appointed to chastise the rebellious. In these modern days better counsels prevail, and people are allowed freedom of worship and of thought, none daring to molest. Every religion must pass through a baptism of fire. For thirty years this has been the case with Christian Science. During this period Science claims a million of believers, spreading what they regard as Truth over the earth. Christian Science founds its belief on the Bible as the great corner-stone of the edifice. In the National Cyclopœdia of American Biography, in a notice of Mrs. Eddy, are these words: "Many people of the thinking class are turning to this science and adopting it, because in it they find a solid foundation, a sure and abiding peace, the verification of the promises of Jesus and a demonstrable Christianity." 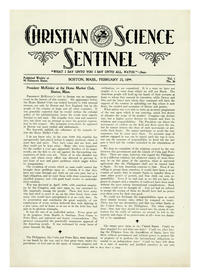