At the Sunday morning service of the Christian Scientists at Odd Fellows Hall on Wisconsin Street a collection was asked in order that the necessary amount might be raised to meet the final payment on the property recently purchased, to be used as a meeting place for the members of the First Church of Christ, Scientist. In response to the request a sum amounting to about two thousand dollars was voluntarily given, and now the last of the twelve thousand dollars required has been subscribed, and on November I the property will be clear.

Six months ago the property on the corner of Main and Seventh Streets, at one time the old Osborn homestead, and until recently occupied by the late Dr. Brodsky, was purchased. At that time, however, all the available cash amounted only to about five hundred dollars, and in the comparatively short space of time which has elapsed, and when it is taken into consideration that the membership is only forty families, or about fifty members, it is indeed a great surprise to the people of this city that so large a sum as twelve thousand dollars could be raised by the Christian Scientists; in fact it seems almost incredible, but nevertheless it is true. What is more, this sect have received the money through voluntary offerings. They do not hold church fairs, sociables, suppers, or entertainments, as is customary in other churches; neither do they do any begging whatever. The money needed is freely given by the members, who are simply asked this question: "Has Truth given to you, and are you not willing to give to Truth in a material way?" And the response to the query is very liberal.—Racine (Wis.) Weekly. 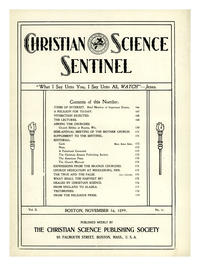