The interest which has been taken in Christian Science in this city for many months, and which has constantly been on the increase, has resulted in a movement that promises to be successful for the establishment of a permanent organization in South Bend. A meeting was held on Friday evening, August 19, at which papers of incorporation prepared by Attorney F. E. Lambert were presented, read, and adopted. These will soon be filed, and the society will then be upon a permanent basis.

The articles of incorporation are not long. They open by stating that James S. Alward, Joseph M. Hamer, and William B. Dickson have agreed to form a society to be known as the First Church of Christ, Scientist, the society to have a corporate existence of fifty years. The objects are set forth to be the "promulgation and demonstration of the teachings of the Bible as interpreted in 'Science and Health with Key to the Scriptures,' by Mary Baker G. Eddy. The business affairs are to be transacted by a board of three trustees, who shall be elected at the annual meetings on the second Monday of each January to serve one year. Their duties will be designated and controlled by certain rules and by-laws yet to be adopted. The trustees for the first year have been elected, and are James S. Alward, Joseph M. Hamer, and William B. Dickson.

Send a comment to the editors
NEXT IN THIS ISSUE
Article
It is almost five years since Christian Science was introduced... 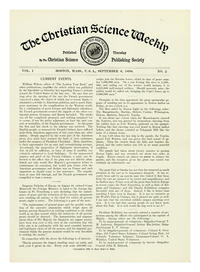