Through the sash curtains of my room the light crept dimly. Above them the window was free and the full moon filled the space with a clean, pure light. The day had been very warm and the atmosphere was just cooling. As I awoke from an early nap I raised my hand to draw the curtains back and admit the beautiful light, clear and unobstructed. As I turned over on my bed my hand unconsciously fell on two objects which had been placed there when removing some clothing from my trunk. I raised them up that I might see them by the moonlight. One was a little silver medal with white satin ribbon; the other a little gold cross. Instantly my thoughts bridged a few years, and I saw a boy of eleven or twelve years marching up the aisle of a Roman Catholic church with many other children. The organ played magnificent music, and the singers' voices seemed angelic to the boy. I watched him as he kneeled with fervent devotion, and a sincere light spread over his face as the "First Communion" was ministered to him. I saw anew his teacher in spiritual affairs pin to his coat a red carnation and a white satin ribbon holding a little silver medal. That boy grew in the religion of his devoted mother; and within a few years afterwards I saw him many times in earnest conversation with the reverend "Father." for the boy now desired to join the priesthood. Later I saw him in mental anguish, and I watched him as one by one the threads which made the rope of his faith raveled and broke. Finally the anchor no longer held his boat, and he drifted on past the signal station of the Roman Catholic church. He drilled o'er all the troubled seas of Protestant churches. And I saw him at the last one—the Congregational church. When all had left, he detained the minister. Together they kneeled by a chair. The pastor's prayers were long and ardent, for he loved the boy. But from his unwilling lips the youth's burning heart tried in vain to wring the prayer of Protestant faith. Then the boat drifted on, into the seas of the religions of the Orient, and found the Mohammedan and the Chinese and the Indian—barren. At the World's Fair in 1893, I saw him with the Brahmin priests studying the thoughts "out of the mysterious East." I saw him study Theosophy and Spiritualism, and then I saw him, almost discouraged, plunge into Hypnotism. After practising there for a time his boat began to near a shore, and then I heard a dull thud as it was grounded on the solid land. Not knowing how long he would stay, in fact simply surveying the shore, with anxious, yet unbiased gaze, he emerged from the boat, and I saw him reading a little book. He read it from cover to cover. He said, "This is Truth! I will follow." Then I saw a little gold cross. My thoughts had returned from the hasty reconnaissance of the few short years, and the cross was in my hand. The boy of eleven or twelve years has grown into young manhood, and is now growing into the likeness of manhood in Christ. As I look back over those years, I am glad for their experience, for out of much tribulation have I learned God. Spiritualism would keep us in subjection to many spirits, good and evil, while Christian Science holds us in one divine Love. Hypnotism would communicate and force suggestion into its subject, while Christian Science knows that we are all the reflection of the one perfect Mind, hence we need not transmit suggestions of health and harmony, for they are man's natural habitat, and need only be discovered to him. Theosophy would have us waste our time in speculation on future lives, whereas Christian Science is a present help, and by it we live this life so that the future may take care of itself. Dear reader, if you are drifting, come to my weather-beaten boat, and it will land you on the shore 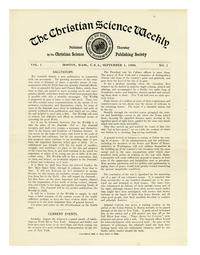