Truth you can trust

Is truth relative, or is there such a thing as absolute, pure truth, independent of opinions?

In times like these, when the noise of opinion is so overwhelming, so loud, we may find ourselves echoing John Lennon’s lyric “All I want is the truth / just gimme some truth” (“Give Me Some Truth,” Imagine, 1971). Yet one person’s or group’s “truth” can be exactly the opposite of what another claims as truth. How are we to know what is actually true? Is truth relative, or is there such a thing as absolute, pure truth, independent of opinions?

Similar questions were probably common in the time of Copernicus. His radical idea that the earth revolved around the sun was viciously and stubbornly opposed and stirred mass confusion about what was true. Yet there never was a moment when the earth did not revolve around the sun. 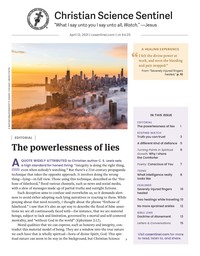