Redemption is an old idea. Today it’s used mainly in reference to the exchange of things such as pledges, frequent flyer miles, and mortgages—for money, free trips, or property. But redemption has a much more profound meaning as a buyback or ransom when we think of it in terms of people—as a person reborn, reclaimed from a life of sickness or slavery or crime.

Redemption is also associated by people the world over with Christ Jesus, especially at the Easter season. In fact, for centuries, Jesus has been called mankind’s Redeemer and “the Son of man,” who gave “his life a ransom for many” (Matthew 20:28). This is the case not only because of his sinless life of love and healing works, freeing so many from suffering, but particularly because of his supreme sacrifice in enduring the crucifixion. His triumphant resurrection three days later meant that he had fully overcome both death and the evils that caused it.

Send a comment to the editors
NEXT IN THIS ISSUE
Article
This Easter, choose to rise higher 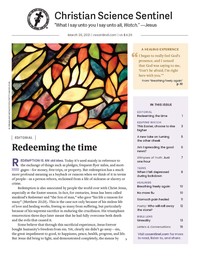