Getting our history straight

I began to pray about the history of slavery and racism in the United States.

When a student of Christian Science was unable to heal a man of a serious wound he had received during the American Civil War, a radical spiritual insight was shared with him. He was advised by Mary Baker Eddy, the Discoverer of Christian Science, that both he and his patient needed to be released from the belief that a war had occurred and was part of the patient’s history.

Although this might sound like a denial-of-facts approach to viewing history, it is consistent with the account of creation outlined in the first chapter of Genesis in the Bible, in which our true “history”—our eternal reality—is actually spiritual and good because we’re made in the likeness of God, Spirit, and are therefore spiritual. 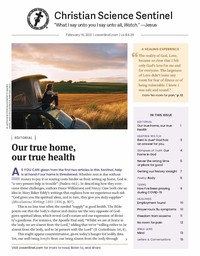