I’ve felt drawn to suicide more than once in my life, but I didn’t really rebel against it until just over three years ago, when the intensity of the pull felt overwhelming. According to a website, I had 11 of the 12 “qualifications” for someone who is suicidal. The only one I lacked was the ability to physically go through with it.

I briefly saw a counselor, who told me I needed to build a bigger support network. My response was that if I knew how to do that, I would have already done it. When I called the suicide crisis hotline one day, the person on the other end agreed that I had much potential and a need for fuller expression. This was helpful to hear, but hanging up, I wept, still feeling like a failure.

The desire to die was persistent, at times aggressive, and I realized I had to figure out what was going on. I turned mainly to Christian Science for guidance, reading and studying passages in the Bible and the writings of Mary Baker Eddy, the Discoverer of Christian Science. In her Miscellaneous Writings 1883–1896, she addresses a question about suicide, saying: “Mortals have the sum of being to work out, and up, to its spiritual standpoint. They must work out of this dream or false claim of sensation and life in matter, and up to the spiritual realities of existence, before this false claim can be wholly dispelled. Committing suicide to dodge the question is not working it out” (pp. 52–53).

Challenged by this concept, I began to see that my own thought was mired in materiality: I was constantly comparing myself with others, devaluing the work I was doing, and questioning my decisions. I was convinced I was not of value to this world as a person, a mother, or a wife, and certainly not as a student of Christian Science.

A statement from Christ Jesus documented in the Gospel of Mark stood out to me: “If a kingdom be divided against itself, that kingdom cannot stand” (3:24). I began to see that I wasn’t making room for the good ideas I had, which had their source in divine Mind; I wasn’t welcoming or valuing their existence, and this was essentially stifling me. Every time I denied my ability, said no to voicing a good idea, or rejected opportunities to feel mental or physical freedom, I was denying divine Life’s expression in me.

It is futile to attempt to fight a supreme power that is Life, God. Even the natural sciences state that living things are designed to live and will make great efforts toward living. And we can see this in nature, with even the smallest tree seeking just enough light peeking through the canopy above it to grow.

Could I accept the fact that I had value just as I am, here and now?

Life is God, inextinguishable. God designed each of us as a beloved spiritual idea. And we cannot smother our own unfolding sense of God as Life.

Every day, we are presented with opportunities to discover more of God as Life and experience Life’s vibrancy, fullness, joy, and newness in ourselves. Pervasive negative thoughts may attempt to smother the better thoughts that are beginning to gain hold. And we may experience a mental struggle that is vehement and persistent—in which we must thwart the influences that would bring thought down to the place of contemplating death. But the battle is spiritual, and we have God on our side.

Christian Science explains the revelation that we are the expression of God’s being. As the textbook on Christian Science, Science and Health with Key to the Scriptures by Mrs. Eddy, states, “God’s being is infinity, freedom, harmony, and boundless bliss” (p. 481). The suggestion that I am separated from good and limited in expression is a direct departure from the spiritual fact of my reflection of God’s nature.

I began seeing that the opposite of living freely is succumbing to mental influences that would work against the establishment of health, harmony, and holiness in my consciousness. To counteract these influences, I began looking beyond myself—and seeing signs of life! People’s smiles, beauty in nature, kind greetings from strangers, all gave me hope. With that new hope, I started to reevaluate my sense of place in various areas of my life and found envy and comparative thoughts dropping away.

Could I embrace my spiritual stature as God’s beautiful idea while also working to bring my unique identity to fuller stature in my daily life and activity? Could I accept the fact that I had value just as I am, here and now? Yes, these were Christly thoughts, voicing good.

Acknowledging God, divine Principle, as the basis of my existence awakened and activated my receptivity to the Christ, which as the “true idea voicing good” (Science and Health, p. 332), directly counters negative thoughts. Christ, the divine influence Jesus represented, is still with us, giving us an understanding that Life is God and that we live in Life as Life’s expression.

The always-present quiet flow of Christ messages overturned the false logic that suicide was a desirable route.

With this greater sense of God as Life, I began to see that I was not my own person to kill; I was the presentation of an idea of God. I began to understand that I am already good because I am God’s idea. The always-present quiet flow of Christ messages overturned the false logic that suicide was a desirable route.

The brightest, most potent source of light is a proper sense of spiritual identification as revealed in Christian Science. It shows us that we reflect divine Principle, that we have the Mind that is God, and that we can employ divine Mind’s power in our own lives to achieve good. There may be many attacks on our trust in the spiritual fact that we are able to embrace the fullness of Life, but we cannot be made to doubt God’s omnipotence and its assurance of our well-being.

None of us is responsible for the thoughts that come to us, but we are responsible for how we deal with them. Suicidal thoughts may come to people from all walks of life, but consciously embracing knowledge of our true spiritual identity removes the supposed power of seduction toward death.

Undertaking the battle to resist these pulls, I got to know God better and trust His omnipotence more. A growing willingness to accept my spiritual nature as God’s expression replaced the mortal elements in my thought that used to respond to the suggestion that I wanted to die. Suicidal thoughts don’t haunt me anymore; I’m engaged in the living of Life rather than the dark contemplation of how to die.

Send a comment to the editors
NEXT IN THIS ISSUE
Article
Manage anger or heal it? 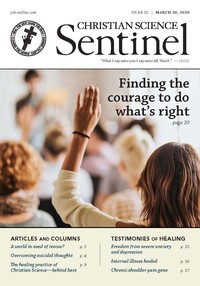