A cartoon that appeared in The New Yorker some time ago depicts God sitting at a desk. On one side of the desk is an in-box filled with people wearing giddy smiles and exchanging high-fives. On the other, an out-box filled with people weeping and wailing. In front of the desk, a throng awaits God’s judgment. The cartoon, which evokes the intended smile, speaks to the old theological doctrine of predestination, by which God arbitrarily selects some of His children to be saved while the rest are consigned to eternal damnation.

Although this doctrine has largely been abandoned by the churches, other secular forms of predestination, or “determinism” to use the current philosophical term of art, hold sway in human thought to the end of placing man under conditions—fatal health laws, beliefs associated with heredity, threatening environmental trends, for example—over which he supposedly has no control, circumscribing his progress or even his chances for survival. 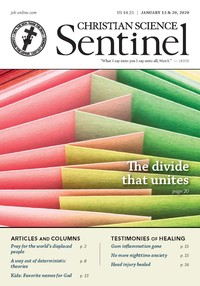