Recently we adopted two kittens from a rescue shelter. One is a gray tabby we named Hawthorne, and the other is an orange tabby we named Louisa May “Alcatt”—both are adorable and very curious. One day when Louisa was almost four months old, she was playing at the very top of our stairway on the second floor. I was standing on the first floor and looked up just as she lost her footing and fell a great distance to the entryway below, landing with a sickening thud. She tried to get up, but one of her legs wasn’t working properly, and her breathing was labored.

I picked her up as gently as possible, sat on the living room sofa with her on my lap, and began to pray. As I did, the image of her falling kept replaying in my thought. I said out loud, “No! That’s not the true picture. That’s not what God saw, so that’s not what I saw.” 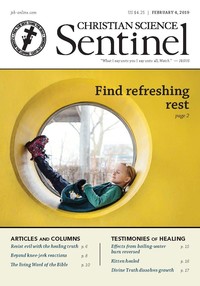