When I read the opening comments about Toni Morrison’s legacy of leaving “an indelible mark on America” in The Christian Science Monitor Daily for August 6, something clicked. Recently I discovered that the Greek word kharaktēr, from which the English character is derived, means “engraved mark” as well as “instrument for marking.” I saw how this meaning of character certainly applies to the impress of Ms. Morrison’s life on humanity, as she not only “unflinchingly plumbed” difficult subjects, such as racism and rage, but did it with empathy and the ability to help others see their own value.

My takeaway from that short read? Character matters. 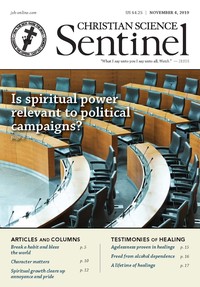