Your place in scientific prophecy

If you had to make a prophecy about the future, what would it be? Is there anything you can say with great certainty that you’re sure will happen? It’s an interesting question to ponder. History has a way of taking some pretty unexpected twists and turns. So, knowing what you know today, what could you prophesy with some certainty about what’s coming? If you asked that question of the prophets in the Bible, what do you think their response would be? If you brought them all together for a prophet convention and asked them to come up with a mission statement, what would it be? It seems to me that if you look at all of their messages in a collective way, their prophesying would add up to this: God loves you, and is going to keep loving you, no matter what.

That may not be the first summary statement that comes to mind when people think about the prophets. After all, a lot of what they had to say focused on all of the terrible and destructive things that were coming down the road. But most of those things came with a strongly stated or implied “if” attached to them. If the people of God didn’t do the things God had made clear were important in order to be aligned with God’s goodness, they were going to have a hard time feeling God’s love as love, instead of as a painful correction. But behind all of those apparent threats and warnings, there was deep and consistent assurance of the strength of the bond between God and God’s people. There was the promise of being sustained, protected, watched over, provided for, and directed each step of the way. That’s why the descriptions of their self-imposed consequences—when the children of Israel strayed from the agreement they’d made with God—can sound pretty severe. But, as with parents who may have set some unpopular boundaries with their children, the underlying message is still “I love you.”

Send a comment to the editors
NEXT IN THIS ISSUE
Bible Lens
Bible Lens—August 13–19, 2018 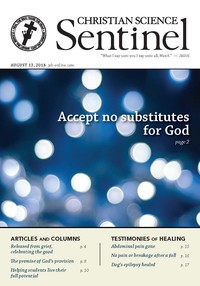