Our daughter had a healing of impetigo that meant a great deal to our family. We were on holiday at the time, with other children around. Over a few days, the appearance of my daughter’s face became very alarming. I recalled a friend of my daughter’s who, some months previously, had spent several weeks off school in quarantine with impetigo.

My husband and I decided we should notify a physician of her condition, since I had been told it was highly contagious. A local doctor saw us in his surgery for three minutes and spent most of that time filling in necessary administrative forms. Then he said with great kindness that if my daughter took the medication he prescribed, the condition would be noncontagious in a week or so. I thanked him, and we left. 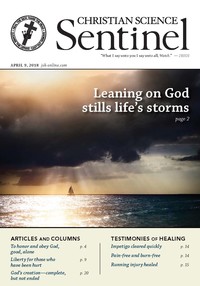