Widening the scope of our prayers

In March 2016 I began to glimpse more of the breadth and scope of Christian Science as a result of two remarks Mary Baker Eddy makes in her book Retrospection and Introspection. Those statements are: 1) that the knowledge of God is “the one great and ever-present relief from human woe,” and 2) that the motive behind all Mrs. Eddy’s labors never changed, which she said was “to relieve the sufferings of humanity by a sanitary system that should include all moral and religious reform” (p. 31, 30, respectively).

As I considered these statements, I realized I had been too lukewarm in my efforts to pray for humanity. Up until that point, I hadn’t grasped how such unselfed prayer could relate to my own purpose and goal in life. I began realizing that my prayers could widen out beyond myself, and through Christlike understanding, bring relief from human woe to others. 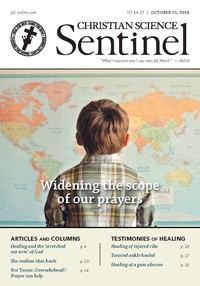