New views on action from a former activist

In the current political climate—in the United States and many other parts of the world—there is a lot of focus on activism. As someone who for a long time identified as an activist and is now a student of Christian Science, I’ve thought quite a bit about action from a spiritual perspective.

Key to the way I understand the common definitions of activist and activism is taking action that promotes justice and reform. I admire many individuals throughout history who have done noble works and courageously taken a stand for humanitarian issues, such as equal rights for all.

Since becoming a student of Christian Science, I’ve learned that there are important differences between the human sense of things and a spiritual understanding of action and justice. A crucial distinction is whether we see ourselves or God, as the source of the good we can do. Do we understand, moment by moment, that it is God that gives us all wisdom and justice and action; and do we turn to God meekly and prayerfully before we make any decisions or take any steps? Or do we believe we have a human mind, will, or power of our own—apart from God?

A crucial distinction is whether we see ourselves or God, as the source of the good we can do.

During my career, a strong part of how I identified myself as a worker had been as an “activist” in the common and even willful sense. When I began studying Christian Science, I experienced an intense period of a few years of sorting through my thinking about a lot of things, especially my identity. At times I felt as though I had lost all sense of a personal identity. But what I was doing was giving up a sense of myself as a mortal with a human will, for a clearer and more humble understanding of my spiritual individuality. I also appreciated learning that this surrendering doesn’t in any way weaken or diminish us. Instead, it does the opposite.

In Science and Health with Key to the Scriptures, the Discoverer of Christian Science, Mary Baker Eddy, writes about the strengthening and expanding effect of this proper identification of oneself. She explains, “This scientific sense of being, forsaking matter for Spirit, by no means suggests man’s absorption into Deity and the loss of his identity, but confers upon man enlarged individuality, a wider sphere of thought and action, a more expansive love, a higher and more permanent peace” (p. 265).

Through my study of the Bible and Eddy’s writings, I also found and appreciated stories of people who challenged mainstream thinking and stood up to injustices in mighty ways. Individuals in the Bible, such as Moses, Elijah, Christ Jesus, and the disciples, were powerful examples. But what I especially saw in their stories, and began to practice more diligently myself, was a strong reliance on and closeness to God—in other words, humility. Their stories of radical action were incredibly inspiring to me, and I could see that their activities had a divine source.

Wanting to follow more closely their examples, I studied what Eddy has to say about humility in her writings. An especially helpful article of hers in Miscellaneous Writings 1883–1896, called “The Way,” states that humility “triumphs over the flesh” (p. 356). She also explains, “One can never go up, until one has gone down in his own esteem.” These words, to me, meant that before taking any action, I needed to more deeply understand my oneness with God as His reflection—that God governs and impels me to act, and that my job is to listen and respond.

This understanding has translated into a continual surrendering of human will, and praying before and while taking action. Many times I have prayed to God, asking for help in yielding to whatever is right, making sure that I have no agenda of my own and that I’m willing to do whatever will help and heal. Then I wait until I can feel a strong sense of rightness and conviction about a decision—until I feel confident that my thought has yielded to God—before going forward.

As God’s reflection, we are moved to act according to God’s wisdom; our role is to listen and obey.

This doesn’t mean that I feel I’ve gotten it right every time. But whenever I recognize that I’ve made a misstep, I just pray and listen more, and trust that the effect of God governing my life will adjust things and help me correct my course.

What have been the results of these changes in my understanding? In terms of taking action, I’ve let myself be led into and out of various jobs along the way, and sometimes I’ve taken valuable steps in my work before I knew why they would be beneficial to me or others. Not long ago I even gave up, without looking back, a decade-long career in a field of work I cared deeply about to pursue a new direction that felt progressive and more right.

Several statements in the Bible and Eddy’s writings that describe the relation between God and man have been particularly supportive. Christ Jesus declared his utter dependence on God in his statements, “I can of mine own self do nothing” (John 5:30) and “The Son can do nothing of himself, but what he seeth the Father do: for what things soever he doeth, these also doeth the Son likewise” (John 5:19). The Apostle Paul writes plainly that we are the “offspring” of God (see Acts 17:28, 29).

Eddy describes man’s role as “the humble servant of the restful Mind” (Science and Health, p. 119). She refers to herself as “a scribe under orders” in writing her works on Christian Science (Miscellaneous Writings, p. 311). She advises us: “All God’s servants are minute men and women. As of old, I stand with sandals on and staff in hand, waiting for the watchword and the revelation of what, how, whither. Let us be faithful and obedient, and God will do the rest” (Miscellaneous Writings, p. 158).

All of these statements have meant to me that as God’s reflection, we are moved to act according to God’s wisdom; that our role is to listen and obey. With this new understanding of man’s spiritual identity and relation to God, I’ve given up the human label “activist” and instead recognize that spiritually we are activated by God. Science and Health says, “If action proceeds from the divine Mind, action is harmonious” (p. 239). This explains the importance of basing our actions—our daily work and decisions—on prayer and yielding to God each step of the way. With this prayerful and trust-filled grounding, we can expect that whatever we are inspired to do will contribute in a significant way to justice, health, and harmony for others, as well as for ourselves. 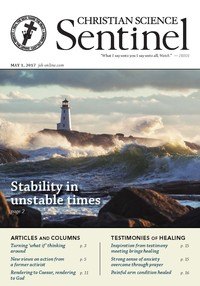