One hot summer there was sporadic race rioting on the post where I was a chaplain. Everyone was on edge. I very much needed to feel a sense of peace and began to pray. The peace came. It was a strong feeling of the presence of divine Love as the Father of us all. With it came an expanded affection for all His children and a conviction that the brotherhood of man was unbroken. This was in direct contrast to the material picture of things.

Unknown to me, at the same time, a soldier who was planning a major escalation of the rioting suddenly felt it was all wrong. To him the promotion system on the post favored whites and needed to change, but this wasn’t the way to do it. Of all the chaplains on the post he found his way to my office. He shared what he and others were doing and his sudden change of heart. I shared what happened to me as I prayed at the same time as his change. We felt that God had brought us together. This proved to be the beginning of a resolution. The rioting stopped, and equally important, ways opened up to educate the post commanders to the injustice and the need to correct it.

Send a comment to the editors
NEXT IN THIS ISSUE
Bible Lens
Bible Lens—March 27–April 2, 2017 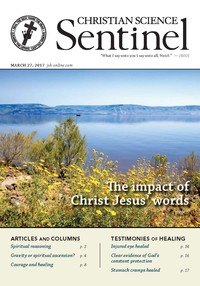