One Ego, one harmonious government

I was watching TV the first night of the attempted coup in Turkey some months ago. The chaos, the rage, the shooting, the bombs, the thousands of shouting people, both for and against the coup—it was bedlam and it was dangerous, and my heart went out to all who were caught up in it, on both sides.

I turned off the TV to pray for a while. Then I opened my Bible to a passage that came to thought: “Why do the heathen rage, and the people imagine a vain thing? The kings of the earth set themselves, and the rulers take counsel together, against the Lord, and against his anointed, saying, Let us break their bands asunder, and cast away their cords from us. He that sitteth in the heavens shall laugh: the Lord shall have them in derision” (Psalms 2:1–4). 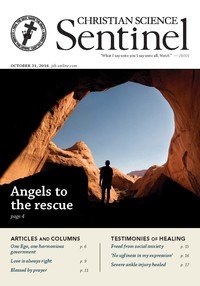