When I read the Monitor editorial about Volkswagen’s emissions deception (see facing page), I thought of a statement by Mary Baker Eddy, who discovered and founded Christian Science: “If you believe in and practise wrong knowingly, you can at once change your course and do right” (Science and Health with Key to the Scriptures, p. 253). It’s such a simple yet profound idea. It suggests that doing the right thing is natural and that past behavior has no power to prevent someone from adopting a higher, Godlike standpoint of thought and action. The editorial refers to another company that was involved in a corruption scandal a number of years ago and has since made good progress in becoming an example of integrity.

Of course, there can’t be a sugarcoating of unethical behavior or a disregarding of its harmful effects. At some point every immoral thought and action has to be faced and overcome, because it’s contrary to God’s nature as infinite Love, pure Spirit, eternal Truth—and to our own true nature as His spiritual, perfect likeness. It’s contrary to divine law. Yet the Bible, speaking of Christ Jesus’ mission, says reassuringly, “God sent not his Son into the world to condemn the world; but that the world through him might be saved” (John 3:17). 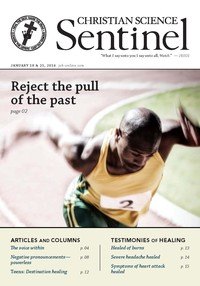