Praying for the earth’s oceans

Seasoned sailor and yachtsman Ivan Macfadyen was quoted several years ago, after returning from his last crossing of the Pacific Ocean: “I’ve done a lot of miles on the ocean in my life and I’m used to seeing turtles, dolphins, sharks, and big flurries of feeding birds. But this time, for 3,000 nautical miles there was nothing alive to be seen” (“The ocean is broken,” The Newcastle Herald, October 18, 2013). Macfadyen told how this once vibrant expanse of sea was hauntingly quiet and covered with trash, part (but not all) of it left over from the tsunami that struck Japan several years ago.

Given the ocean’s beauty, immensity, and abundant provision for humanity and the earth, it is perhaps difficult for many of us to comprehend this sea of neglect and devastation on such a massive scale. In addition, character traits of self-centeredness, negligence, or ignorance have caused some people to rationalize that just one discarded plastic bag, container, or fish net is insignificant, thus adding to the waste. 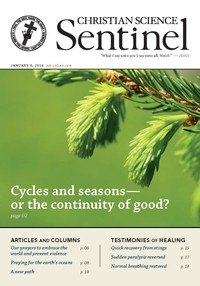