Facing the foe with courage

In the first book of Samuel in the Bible, there is a stirring story of courage involving a giant warrior and a youth armed with only a sling and five stones (see chap. 17). The warrior, called Goliath, was representing the Philistine army and came to meet in combat with one soldier from the army of the Israelites, led by King Saul. Goliath was huge and fearsome. Everyone cowered before him. If might were measured by physical strength alone, then it was no battle, because the Philistines clearly had the upper hand. The Israelite army were completely intimidated by the tactics of the Philistines, believing they were defenseless against such might.

But there was a youth in the Israelite camp who saw things differently. He wasn’t impressed by Goliath’s gigantic proportions or his reported invincibility. David already had proof that God is the greatest power, and that in any circumstance He can bring deliverance (see I Samuel 17:34–37). With this confidence, David nominated himself to meet in combat with Goliath. He was absolutely certain that God would give him what he needed to deliver the Israelites from harm.

Send a comment to the editors
NEXT IN THIS ISSUE
Image and Inspiration
Still, still with Thee 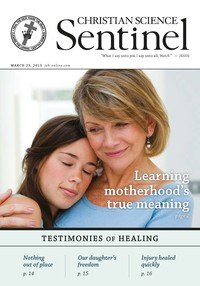