From frustrating game to golden opportunity

I have attended a summer camp for Christian Scientists for five years now, and throughout those five years I have always been in the horse programs. For the past three summers, I have participated in the polocrosse program for high schoolers, where you learn the rules in order to play, and later on in the session you even participate in a real tournament outside of camp. Polocrosse is a team-oriented sport that is played all over the world. It is a combination of polo and lacrosse on horseback.

This past summer, I was getting moved up to a higher level of game for the tournament I was going to compete in. It is an understatement to say I was nervous for that first game! While “tacking up,” or putting the equipment on my horse, before the first game of the day, I could tell she was feeling my nervousness, and this only seemed to make her more antsy and excited for our game, which was only an hour away.

Kiersten Sheehan is a junior in high school. She loves playing volleyball and polocrosse and also enjoys acting, as well as being an active member of stage crew.

Send a comment to the editors
NEXT IN THIS ISSUE
Bible Lens
Bible Lens—February 16–22, 2015 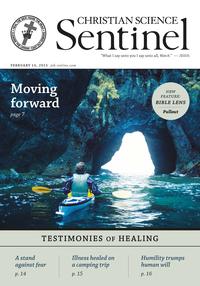