Saving the innocent—one life at a time

Since I’ve been living on a small farm in a rural area with my family, I have been presented with matters of life and death much more frequently than when I lived in town. It’s a bit like people in areas affected by violence and turmoil not of their choosing. I did not decide one day that I was metaphysically ready to face bigger challenges, or that I wanted to have such experiences imposed on my life. I face challenges and pray about them because they are demanding my attention. Most of us probably face challenges in much the same way.

This year, as in the past, I have often prayed about the well-being of the animals on our small farm. I had been praying over several days about some problems, which included the accidental death of a little chick and a young goat. I had also heard various disturbing news items, particularly a report that was issued about the many cattle killed in a South Dakota blizzard last fall. The material message seemed to be that the innocent suffer. In prayer, I rejected this and refused to be trapped into believing that evil could triumph over the innocent. I realized that our God-given identity is spiritually based and can’t be taken from us. 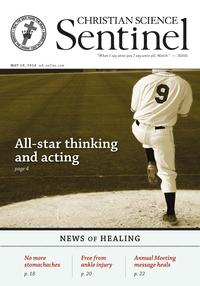