The Board of Trustees, The Christian Science Publishing Society

There’s a story about a town that was so small it only had one traffic light in the entire town. In fact, after some time the people of the town realized they really didn’t have a need for even that single stoplight, so they decided to have it removed. But in the first weeks following its removal, the town experienced its first traffic problems because half of the drivers, out of sheer habit, were still coming to a stop where the traffic light had been, even though it was no longer there.

We recently experienced something similar with respect to a small change in the printing of the Christian Science Quarterly Bible Lessons. For decades upon decades there had been a small notice that served as a kind of traffic signal to help transition between the Responsive Reading and the Lesson-Sermon. It simply read, “The following citations comprise our sermon.” 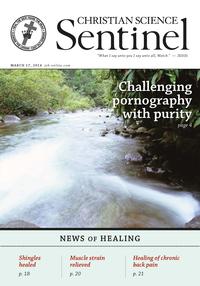