Routing out the ‘oppressors’

The Golden Text in this week’s Christian Science Bible Lesson, titled “Are Sin, Disease, and Death Real?” opens with the Psalmist’s plea for salvation from “mine oppressors” (Psalms 119:121). What greater oppressors does humankind have than sin, disease, and death? And what greater salvation could we experience than freedom from these oppressors? The Golden Text closes with the Psalmist’s delight in God’s law (see 119:174). This is the law that destroys the oppressors.

Section 1 affirms that God’s law of truth frees man from so-called laws of sin, disease, and death by forgiving iniquities, healing diseases, and redeeming lives from destruction (see Psalms 103:2–4, citation 2). Any law that claims we are born sinners, or helpless sufferers of disease, or inevitable victims of death, is a false law that Christian Science rejects—because Science is based on the eternal truth that a God of love does not enact laws to condemn His own creation. On the contrary, Love’s divine law annihilates sin, disease, and death. 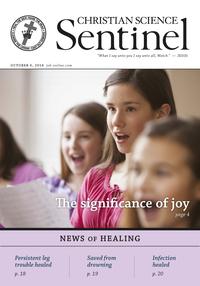