LAST YEAR, THE FILM The Passion of the Christ caused reverberations around the world as debate swirled in the press, in churches, and in homes over Mel Gibson's depiction of Jesus' crucifixion. What heightened many people's reactions to the film was the disturbingly graphic portrayal of suffering that Jesus endured. What was almost entirely absent from the film was Jesus' resurrection.

Gibson's film, focused as it was on the crucifixion, glossed over the central points of Christianity: Jesus' proof that death could not terminate Jesus' life; that life is eternal, ongoing; and that God, divine Love, did not forsake His only begotten Son, and never abandons any of His children, no matter how dire the circumstances. And all this is essentially what the Christian world celebrates this Easter season. 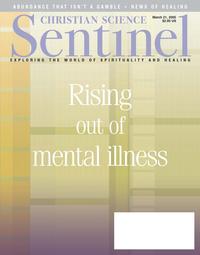