Like any daughter who loves her mother, I wanted to do whatever I could to help mine when she became ill. Before this, Mom and I had been sharing townhouse for several years, and she had always paid her part of the expenses. When she was no longer able to work, however, I took over not only the housing expenses but the payment of her nursing care as well. first, I thought I could handle the added expenses. But over time, I became burdened with the escalating, ongoing costs. I was increasingly afraid that I wouldn't be able to manage everything.

Because my work involved extensive travel, I was often away from home for long periods. During those times, Mom would go to a Christian Science nursing facility for the ongoing care she needed. And even when I was not on the road, she would sometimes need to have a Christian Science nurse on hand in the home. As anyone who has been in these situations knows, this type of day-and-night care can be quite costly. I would try to pay off the nursing bill from the nursing facility at the same time that I was also incurring new nursing expenses at home. The debt was rising and things were looking desperate.

Cindy Neely speaks internationally on spirituality. She lives in Chicago. 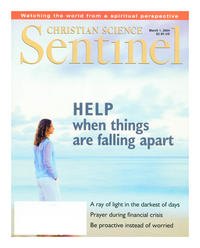