As the war in Iraq appears near closure, one's attention naturally turns to the need to reconstruct, or restore, what has been lost. To restore something means to give it back, ot return it to its original position. Of course that applies both to the physical structure of this ancient Bible land, which includes the historic site of Babylon, and to the morale of its people, who have lived under a particularly sordid kind of tyranny. 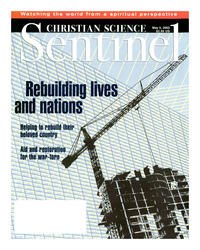