Peace in a shared homeland

I HAD BEEN TRAVELING in Israel for several days in April 2000, working on a short film that traced some of Jesus' footsteps through this land. Since we had only about a week to shoot the scenes for our script, I was constantly scanning the map and the landscape for our next shot. My film crew and I were generally traveling off the beaten track, looking for those timeless vistas that are everywhere in the Holy Land: thousand-year-old walls, herds of sheep grazing in remote valleys, dawn breaking over the undulating Judean desert, sunlight on the Sea of Galilee. I was enchanted by the land and its people, and wondered why I had never visited this part of the world before.

Cut to the present-day realities in Israel. Everywhere we went, there were reminders of unresolved conflicts simmering beneath the surface. Young Israeli soldiers armed with automatic rifles were posted at roadblocks and street corners. There was intense security in and around the Old City of Jerusalem. We heard artillery fire from military exercises in the Golan Heights. And there were the looks of suspicion, cutting like knives between ethnic groups near security checkpoints and border crossings.

Chet Manchester is creative director for The Mary Baker Eddy Library for the Betterment of Humanity in Boston. 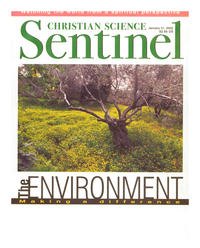