Overcoming sexism in the symphony

When I was appointed to a prominent symphony orchestra thirty years ago, I became the seventh woman in a group of 104 musicians. A few years later when I became the first woman to lead a large string section, shock waves went through the male-dominated orchestra. As the principal, I was responsible for the section's voice in the whole fabric of the music—its relationship to the conductor, concertmaster (leader of the orchestra), and any voice in the orchestra that we were playing with. Leadership also meant playing my instrument with a very high level of skill and musicianship.

The initial encounter with less-than-positive enthusiasm about my position occurred during the very first concert after I became principal. An older male colleague in a neighboring section reacted to the presence of my instrument in his so-called territory by whacking his bow against mine. My immediate thought was "Love thy neighbour" from Jesus' Sermon on the Mount. I recognized that he would not have made that gesture if I were a man, and I instantly forgave him and loved him. That dissolved the tension and annulled the gesture. He never bothered me again.

Send a comment to the editors
NEXT IN THIS ISSUE
Article
Study hall: a place to PRAY 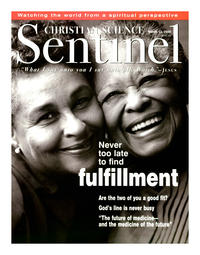