I was one of over 200 singers gathered at a week-long summer choral festival to rehearse and perform Felix Mendelssohn's oratorio St. Paul. I didn't know much about the director before we arrived, other than that he was from a part of the United States that I associated more with record-breaking cold temperatures than musical excellence. He was small and looked unassuming. I was first struck by his warmth and friendliness, but I wondered what he could accomplish. Preparing a major choral piece in one week with a huge group of amateur singers who have never worked together is no small feat.

There were surely times of vigorous drilling, and we knew he had high expectations. But he started each rehearsal with a humorous story or anecdote. Once he taught us a children's camp song. Then there was the tongue-twisting poem. These diversions always made me laugh, but each time I felt a twinge of concern that we were losing valuable and scarce rehearsal time. I also wondered if he'd be quite so jolly when the crunch came later in the week and we really had to pull this piece together. I tried to reassure myself, "If the concert bombs, at least we will have had fun." 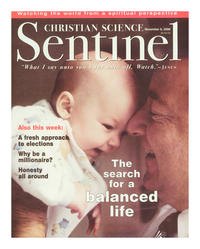