"Thou shalt not steal"

My mother, in her quiet way, once told me something that I have since come to think of as "my mother's rule for guarding my moral integrity." She said: "If you wouldn't want people to know you are doing it, don't do it." This gave me a yardstick for measuring the Rightness or wrongness of something I was tempted to do—before I did it. If I knew I wouldn't be happy to have someone catch me at it, I knew it was wrong, and I wouldn't do it.

Stealing is something that obviously fits into the category of not wanting people to know what you are doing; it's usually done secretly, with the hope of never being found out. I don't recall exactly when mother gave me this advice, though I do know it was sometime after a couple of instances when I had sneaked into her bedroom and taken something from her purse. She never mentioned those instances specifically, but I can't remember stealing anything after that. It was clear to me that stealing was wrong, and I had no desire to do what I knew was wrong. I wanted to do what was right—the kind of thing I would be happy to know that I had done, and that I would be happy to have others know about. That made stealing out of the question for me, because it would rob me of my moral integrity.

Send a comment to the editors
NEXT IN THIS ISSUE
Editorial
Too much buying—how do you stop? 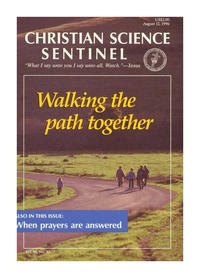