One spring, after a particularly harsh winter, we experienced an unexpectedly rapid thaw. As a result, the lake nearby overflowed the dam, and the creek behind our home flooded its banks. Our backyard became filled with the steady current of the stream, and our home flooded with several inches of water.

In the backyard sat a little henhouse, home for our three pet chickens. One of the hens had been roosting on two eggs for several weeks. Because the water was so high, I became concerned for their welfare and made my way to the henhouse. Although their house had a foot and a half of water in it, the chickens were safe; and much to my delight, I saw that one of the chicks had hatched and was safely tucked under its mother's wing. The other egg had the tiniest of holes in its shell. Upon returning to the henhouse a couple of hours later, I saw that both wings of our mother hen were snuggling little chicks! 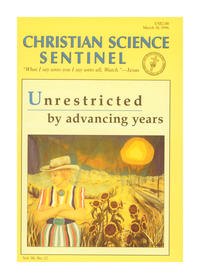