Pictures of cisterns uncovered in the desert settlement of Qumran aroused interest while I visited an exhibit on the Dead Sea Scrolls. The Bible often mentions cisterns and wells, but I never considered their nature. A little research revealed a cistern to be a tank or a hole dug to capture and store runoff water, while a well more often refers to a shaft sunk to tap water flowing from the earth. Biblical terminology refers to water emerging from such a natural, uninterrupted spring, or fount, as "living water."

The natures of cisterns and wellsprings suggest different ways of looking at provision. Cisterns provide a means of storage, a place to keep something so that it can be drawn upon when needed. It represents, however, a finite supply that can be used up and found insufficient in times of great need. The well taps a fount that isn't depleted because it draws on a constantly renewing source. 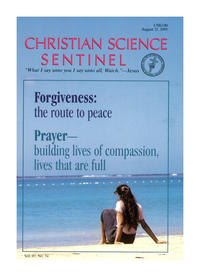