When I was between the ages of six and eight, I attended a...

When I was between the ages of six and eight, I attended a Christian Science Sunday School. As a teenager I occasionally attended or a lecture. Christian Science wasn't discussed in our home, and we didn't read the Lesson. I started smoking and drinking—I was seeking something, but didn't know what.

When I was about thirty, something was not right with my body, though I could not define just what the trouble was. I had been sickly all my life. One night I reached out to God, and gradually remembered "the scientific statement of being" from Science and Health and the Lord's Prayer. I had learned these in Sunday School, and I clung to them for several hours. That night I was actually healed of drinking. Although I had been on the verge of alcoholism, my desire for alcohol was permanently gone. 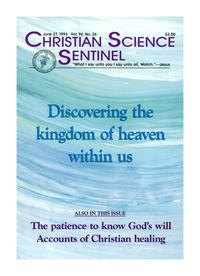