Windows that open to God's love

In his book The Gravedigger File, Os Guinness makes this perceptive observation: "Human life has traditionally been lived in a house with windows to other worlds. These windows may have sometimes become dirty, broken or boarded up, but they were always there. Only in the modern world have we achieved what has been called 'a world without windows.' Shut off from transcendence, modern people are shut up to triviality."

We can see a tendency in society today to focus thought on materiality as the only reality. The emphasis on material criteria, status, and personality for measuring success has sometimes been at the expense of spiritual growth. Reliance on "things" and persons for happiness does not bring the lasting satisfaction and security that mankind craves. Materialistic dependencies often have the effect of limiting and enslaving thought by locking it into a self-centered, circumscribed point of view.

Send a comment to the editors
NEXT IN THIS ISSUE
Testimony of Healing
There have been numerous healings during my twenty-four years... 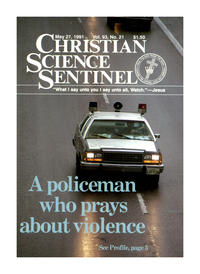