One month before our first child was due, I began to hemorrhage...

One month before our first child was due, I began to hemorrhage heavily during the night. My husband immediately called the doctor who was to deliver the baby, as well as the Christian Science practitioner who had been praying with us during my pregnancy as I sought a deeper understanding of spiritual identity. The doctor told my husband to bring me to the hospital right away.

When we arrived, it was determined that the normal connection of the organs involved had broken, leaving the fetus without the necessary supply of oxygen and nourishment. The doctor informed my husband that if a Caesarean section were not performed, the baby would not be born alive. The request was made that we be allowed to rely on Christian Science before any further action was taken. The doctor agreed to this, as his mother-in-law was a Christian Science practitioner and he had witnessed many healings within his own family as a result of spiritual prayer. 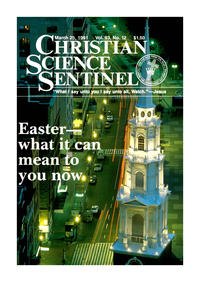