The irony of spiritual discovery

There is something within us that is drawn to truthfulness. We don't want to be deceived or left in the dark about things that matter. And reference to truth is pervasive throughout the Scriptures. It's easy, then, to understand why the word Truth is a synonym for God in the teachings of Christian Science. Yet truth often seems elusive, whether we're associating the word with God or just thinking of the quality of ordinary veracity.

When we turn to the Bible, the discovery of truth is frequently attended by the most ironic and unexpected series of events. For example, the oneness of God was a powerful discovery that dramatically changed the relationship between the Egyptians and the children of Israel. But had you been an Egyptian citizen or government official in the thirteenth century B.C., would it have seemed reasonable that this profound insight into the nature of God would have wound through the byways of an infant found in a little boat made from bulrushes? And then more incredibly, would you have expected that child to grow to manhood, flee into faraway exile, and return years later to lead a group of slaves out of one of the richest nations? Nevertheless, those unexpected events led to the Ten Commandments and the profound worship of God as one God. 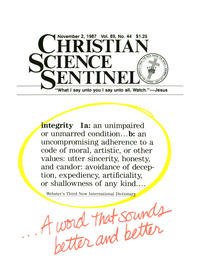