A father who believed

There was once a man whose son was sick. He was very concerned about his boy, so you can guess how glad he was to hear that a certain teacher, who healed people through the power of God, had come to a town quite a distance away. The father decided that if he could get this healer to go to his son, the boy could be made well again.

If he had decided that there might be too many other people asking for help, or that his boy was too far away for the healer to go to him or too sick to be cured, then this story might have had a different ending. But the father did go right to the healer and begged him to come to the house and cure his son.

Send a comment to the editors
NEXT IN THIS ISSUE
Testimony of Healing
I would like to express my gratitude to God... 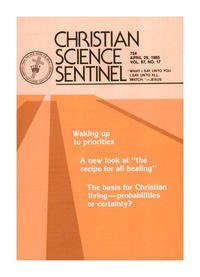