Getting off to a good start

At the turn of the year, when 1984 seems final history and 1985 speculative prediction, our progress will surely be enhanced if we will consider what God, good, has revealed Himself to be. The book of Revelation declares, "I am Alpha and Omega, the beginning and the ending, saith the Lord, which is, and which was, and which is to come, the Almighty." Rev. 1:8.

Saying that God is Alpha and Omega is the Greek version of saying that He is everything from A to Z. Or, as a Bible dictionary puts it: "Alpha was the first, and Omega the last letter of the Greek alphabet, as Aleph and Taw were the first and last of the Hebrew. In the Talmud, 'From Aleph to Taw' meant 'From first to last,' including all between." James Hastings, Dictionary of the Bible, rev. ed. (New York: Charles Scribner's Sons, 1963),   p. 23 . 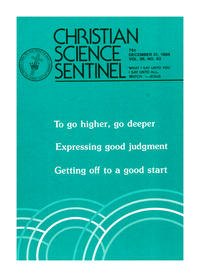