A student of Christian Science was traveling with her family in a car when her three-year-old daughter said she felt sick. The mother was filled with consternation. At that point they were passing through central London. Traffic was heavy, and it was impossible to stop. She desperately searched for a paper bag to avert disaster in the crowded car. The three-year-old, who attended a Christian Science Sunday School, demanded that her mother pray, and the mother began to declare aloud the fact that the child was God's perfect child and could never be sick, because God was never sick. Still the child persisted, "Pray to God, Mummy."

The mother turned to God in silent prayer and humbly asked what she needed to know. Immediately came the answer, "Put down the bag!" Why, of course! She had been declaring the truth while at the same time propping up sickness by holding on to the bag "just in case." She realized that healing called for consistency. Obediently she put the bag away and assured her daughter she would be perfectly all right. The child went to sleep almost immediately. There was no further mention of the sickness, despite the fact that their journey continued for seven hours.

Send a comment to the editors
NEXT IN THIS ISSUE
Article
Spirituality now? 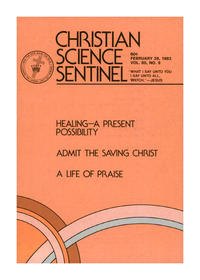