A recent cartoon pictures a robot lying on the floor, having been shot. One of the two figures looking on, the one with the smoking gun in his hand, explains, "He knew too much." Liebermann in World Press Review, January 1982, p. 40 .

The time is approaching when people are going to have to face squarely questions regarding real intelligence and artificial intelligence (a term coined over a quarter of a century ago to describe the ability of certain machines to do things that we usually call intelligent). Do we sometimes mistake the two? Do we feed material information into ourselves, then draw conclusions solely from that information and call this intelligence? If we were to accept that man is just a mortal information processor, we might conclude that in light of a computer's recent victory over the world champion backgammon player, The New Yorker, December 14, 1981, pp. 50, 51 . machines may someday prove to be more intelligent than people. And we might even suspect a given machine of knowing so much that it is a threat to us. In fact, the renowned astrophysicist Dr. Robert Jastrow speculates that the silicon "brain" of the computer will supersede the carbon-based human brain, and that eventually computers will become our masters. The Enchanted Loom: Mind in the Universe (New York: Simon and Schuster, 1981), pp. 144, 145, 163 . 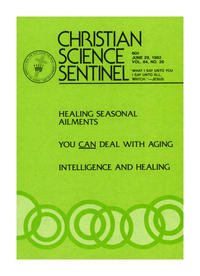