"He shall give his angels charge over thee"

This is the spiritual thought that protected and guided me throughout the Korean War—and has helped me ever since. When I was recalled to military service, my wife of ten months, who is a lifelong Christian Scientist, urged me to carry this Bible passage with me. It is part of the eleventh verse of the ninety-first Psalm and reads in full: "For he shall give his angels charge over thee, to keep thee in all thy ways."

I was to discover that I would have to change my concept of angels before this divine direction and protection could be manifested in my life. I had not found comfort or an understanding of God in my former religion, but nonetheless I had disciplined myself to go to the Bible for answers. My wife and I also had many quiet discussions concerning the revelations of Christian Science, whose Discoverer and Founder is Mary Baker Eddy. Yet I had not begun to grasp its truth. But as our troopship steamed toward a landing in the Pusan perimeter of South Korea, my prayer for protection revealed to me that man is God's spiritual creation, forever at one with Him, as Christ Jesus implied when he said, "I and my Father are one."John 10:30. It was as if a dam had broken, and my thought was filled with understanding. I now grasped what my wife and I had discussed. I was beginning to see my true relationship to God. 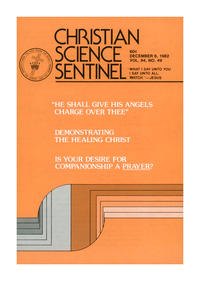