Christian Science has been my only physician for over half a...

Christian Science has been my only physician for over half a century. During that time, with God's help, we reared two families without resort to material medicine—our own children and then two grandchildren. When the children were ill they were quickly healed. As our understanding grew and the children were exposed to so-called contagious diseases, we learned that it is impossible for contagion to even appear to manifest itself in God's kingdom, where we abide. I applied Mary Baker Eddy's admonition in Science and Health with Key to the Scriptures (p. 392): "When the condition is present which you say induces disease, whether it be air, exercise, heredity, contagion, or accident, then perform your office as porter and shut out these unhealthy thoughts and fears."

One time while taking a bath I found two large lumps on my breast. I became so frightened that I was overwhelmed for a little bit. Then like a voice there came to me the question "Do you believe in God?" I thought it over thoroughly and said, "Yes! I believe that God is All-in-all." Again, "Then how can you believe in something so unlike Him?" Thoughts such as these began to flow into my consciousness: "Do you believe in God's all-power? Do you believe in God's ever-presence?" As I answered each of these questions in the affirmative I began to feel God's presence and had an exalted feeling. I thought of Jacob; I, too, held on to my revelation until my morning of liberation came. I forgot about the lumps, and it was several weeks before I thought of them again. They were gone, as I knew they would be.

Send a comment to the editors
NEXT IN THIS ISSUE
Testimony of Healing
When I think of the many blessings that have come to me over... 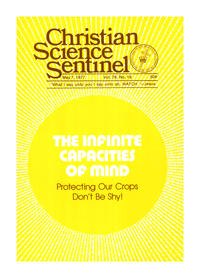